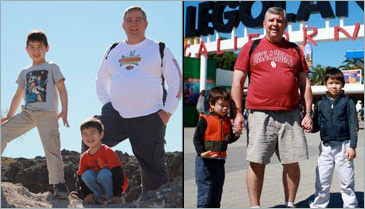 “My wife wanted me to do The Daniel Plan from the very beginning,” attorney Michael Henson admitted. But he wasn’t convinced by her argument.

In spite of a 125 pound weight gain, Michael wasn’t ready to try one more thing that didn’t work. High school and college athletics had given him a discipline that helped in his spiritual life but did not keep him from putting on weight. “I had a sense of what some people call the great abyss—that I was too far gone to ever get back into shape.  I had tried but never been able to keep it off.”

So what finally convinced this trial lawyer to retry Daniel’s case?

“In February 2011, a friend gave me the book Younger by Next Year (Chris Crowley, Henry S. Lodge; Workman Publishing 2007).” Michael learned the concept of regular exercise. And then he did the most important thing he could do: “I prayed about doing The Daniel Plan and a minimum of 45 minutes of exercise as well.  After we attended a Daniel Plan Rally we committed to do so. By the grace of God, I have done so.”

Since that day last spring, Michael has lost about 50 pounds with a goal of losing another 30 to 40.

In adopting The Daniel Plan and choosing a path to better health, Michael made some lifestyle changes—like incorporating more fruits and vegetables and eliminating processed foods, along with “a significant amount of white sugar and flour.”

”My wife really wanted me to lose wait so I could be around for my boys, who are now six and four. She wanted my triglycerides to go down and they have.”

Today, Michael no longer lets work be an excuse. “I make time to exercise on a daily basis,” adding that when he travels or is away from his regular environment he looks for places to take a walk.

“This is a change in priorities. It has made an impact upon my attitude to be able to live a disciplined life again . . . I have learned that a disciplined life ‘feels’ better and is more encouraging.  I have learned to be a smarter shopper and not to fall into ‘junk food’ or ‘fast food’ mode because it is easy. Quick and easy are not always kingdom values . . . However, when I humble myself to be focused on health and discipline myself to eat nutritional meals and exercise, I can live out I Corinthians 10:31— whether you eat or drink or whatever you do, do all to the glory of God.

“I have more energy, am more disciplined, and have had a much more consistent quiet time and walk with our Lord.  I am not nearly as frustrated.”

Michael admits that choosing The Daniel Plan was not without its challenges. Whenever we attempt to do something good for ourselves or others, we can expect opposition, and Michael definitely encountered it.

“About the time I started to do The Daniel Plan, major problems started coming up at my old work. I eventually resigned in April.” Noting that The Daniel Plan provided a way to draw nearer to God, Michael says, “the discipline I had practiced in eating has been a strength and encouragement to me during a major time of transition that now has me working in Oklahoma while my family is in Arizona.  I have reminded myself if I have crossed the abyss in losing weight then I can cross the abyss in this challenge as well.  It has provided hope.”